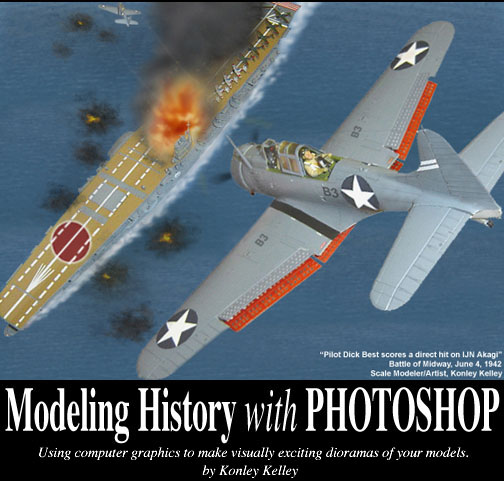 Trying to make a scale model look like the real thing isn't easy. It takes hard work, resources, time and talent. Since the beginning of film, Hollywood has tried to make scale models look the part. I think every modelmaker and hobbyist, whatever the age, also wants to create something faithful to the real thing.

Models are still used in film but computer graphics and 3D offers more freedom to the filmmaker and can create some very exciting and large scale battles like nothing seen before (unless you were an eyewitness!). Recent war films have pushed the special effects envelope and any history buff has to be excited about what will be showing up at the Cineplex next.

Many of the tools used by professional graphic artists are available to us for our home PC's. Although there are quite a few very good digital video and 3D modeling applications, Adobe Photoshop is essential for anyone creating SFX for the entertainment industry, for print media, and on the web. And, in my case, it is also fun to combine Photoshop with scale modeling.

As an average scale modeler and semi-skilled Photoshop artist, I enjoy taking digital pictures of my scale models and using this amazing tool to create exciting stuff on my Mac. Here are the basics for creating a digital diorama

Creating the "Battle of Midway" using Photoshop and scale models. 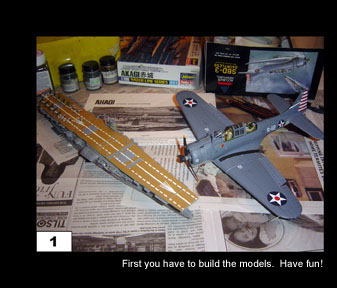 First you need a model. For this digital diorama, I built a 1:700 Hasegawa Akagi and a 1:48 Accurate Miniatures SBD-3 Dauntless. I picked up the Dauntless on sale and the Akagi was a gift from a friend. Because the Dauntless had markings for the Battle of the Coral Sea, I figured I'd make a diorama from that battle. After looking at artwork from various military/aviation artists, particularly Robert Taylor's "Strike Against the Akagi," I decided it had to be a Midway diorama. Sothe modeling is done, let the computer work begin! 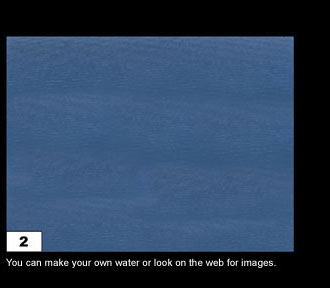 Photoshop is all about "Layers." Like a 7-layer cake, each image you place on top of another image becomes the foreground. You also can work independently in each layer without messing up the other layers. I knew "water" would be my background layer so I used an old 3D software package to render water as it might look from a diving plane. 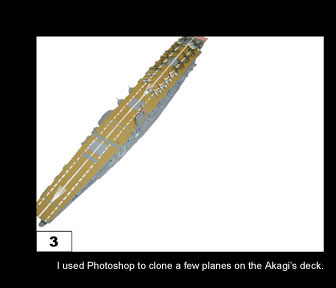 The next layer is the Akagi. I photographed the ship in my kitchen with a Sony Cyber-shot 3.2 megapixel camera. Using Photoshop, I carefully cut out the Akagi then pasted it into my Photoshop scene above the water layer. 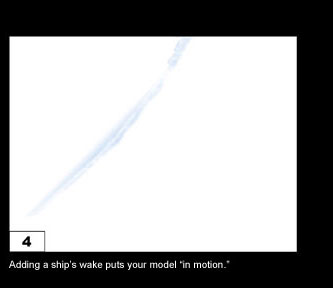 The Akagi wasn't standing still when the U.S. dive bombers attacked. She was about to launch an airstrike against the American carrier spotted by a scout plane. At full steam, she needed to be leaving a wake. 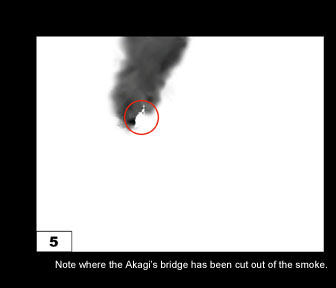 The first bomb has hit the Akagi in this layer so you need to start with smoke. By working with various greys, feathered brushes, and smudge tools, you can create realistic smoke. (Note ­ by using the opacity function on this layer, you can look at the ship behind it and crop out the smoke that would be behind the bridge - the white area is transparent) 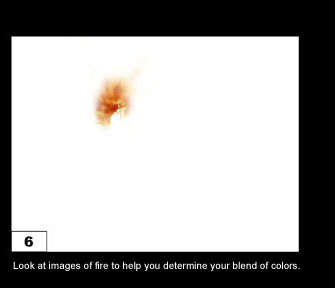 Fire can be made using the same tools as I used for smoke. Cropping the fire behind the Akagi's bridge is also done here. And, for the final image, you can use your blending tool, smudge tool, and feathered brushes to create the flak bursts from the Japanese AA gunners. 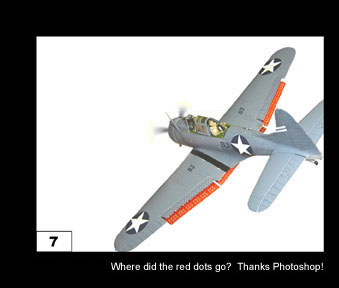 The Dauntless comes next. But ­ problem ­ no pilots. I picked up some Verlindin U.S. Navy pilots at the Squadron Open House in 2003. I had to break a lot of "bones" to get them to fit into the very detailed AM cockpit. The greater challenge was decaling. Using Photoshop, I "re-decaled" the plane with markings for the Battle of Midway. I removed the propellor and used a feathered brush and smudge tool to create the blurred prop. And, this plane actually had some dive bombing practice before I snapped its picture. I dropped it on the kitchen floor on my way to the garage to zap it with dullcote. A lot of the neat AM cockpit detail parts now rattle around inside :) 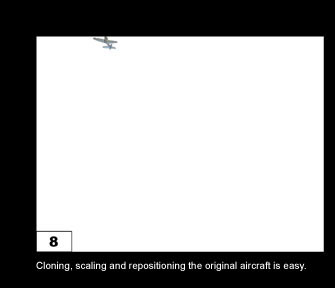 I needed to create the plane that dropped the bomb. It is the original aircraft cloned, scaled in size, and repositioned. Because the plane is pulling out of its dive, I deleted the distinctive red flaps. 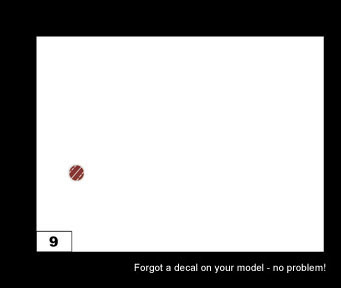 After looking at models of the Akagi on the web, I decided to put a rising sun on the deck although the model kit directions didn't instruct me to do so. Back comes a red dot!

If you are happy with the combined layers, save a Photoshop file if you want to work on it again. You can then "flatten" the layers to save a .jpg or .tiff file that can be printed or put on the web. The larger the image and higher the resolution, the greater the file size. It is totally up to you. Save multiple versions! 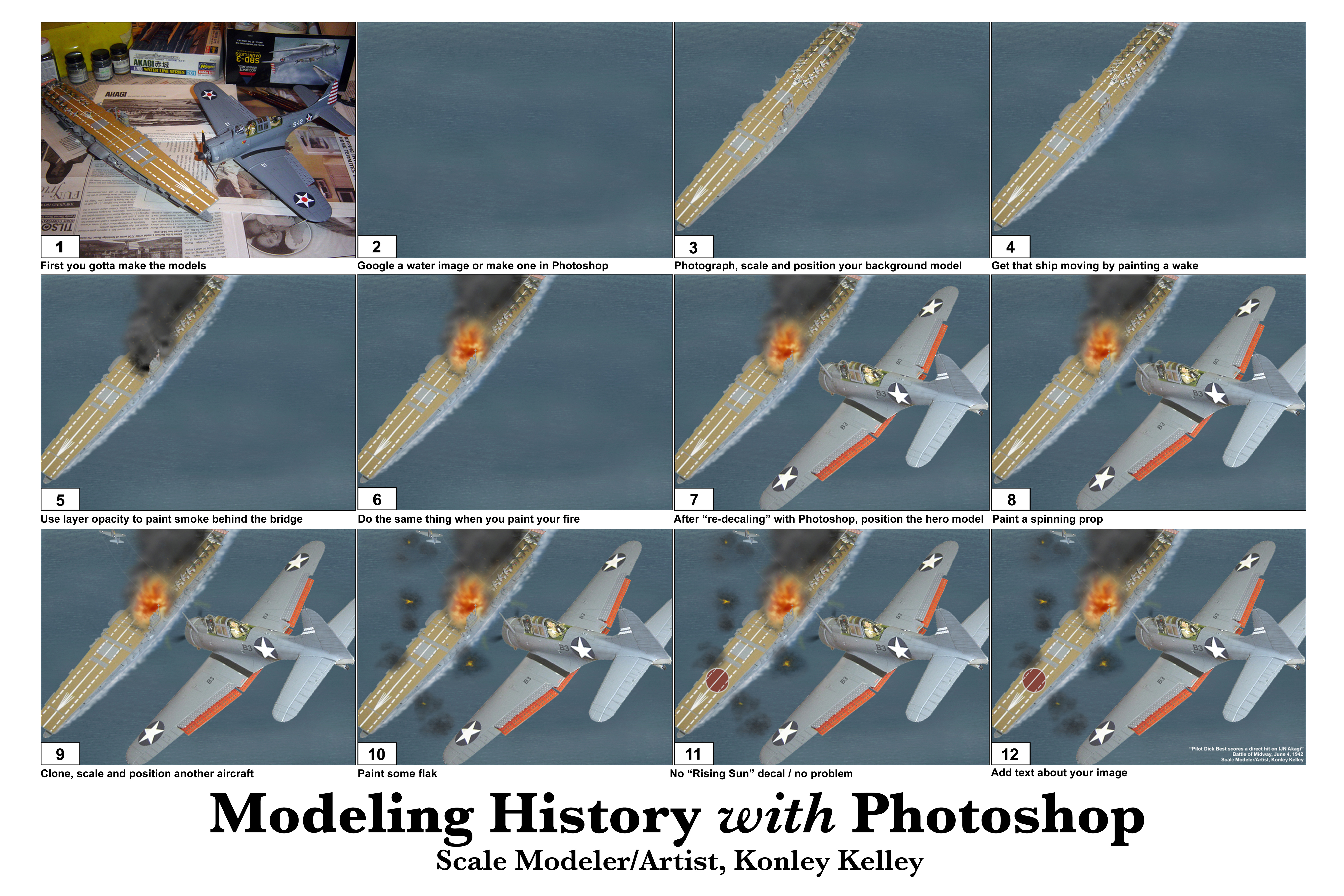 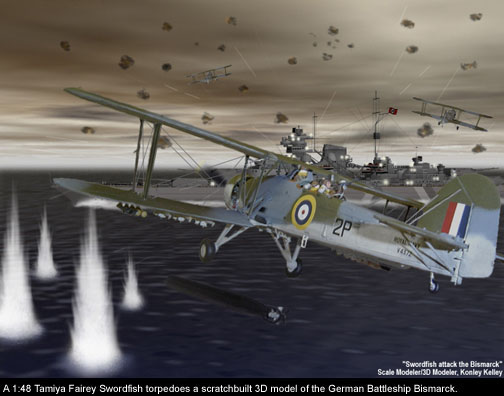 I've created dozens of images like this and it is a lot of fun. The most challenging thing for me is always the lighting. I'm not a professional photographer and usually do my hobby late at night so the kitchen fluorescents and camera flash are about all I have to go by. I use Photoshop to even out the lighting and adjust the colors. I've also shot a lot of models outside using natural light and that can get you good results - if you put your dog in the house first.

As far as Photoshop goes, most community colleges including the one I work at have some great classes ­ for beginning to advanced users. The software is also worth the investment. I use it for all kinds of family stuff and use it at least once a week on a project related to modeling or my website. This week I was making model decals with it.

One important thing is keeping in mind that the miniatures you are making once existed in actual size and were operated by real people. I am on an e-mail circular called the "Battle of Midway Roundtable." Vets and history buffs read and contribute to this newsletter. I asked the editor to post my Midway image and heard back from several Midway veterans about the historical accuracy of the image. It created a great dialogue among the group about how the U.S. dive bombers attacked the Japanese carriers and in a matter of minutes turned the tide of the war.

This is a fun hobby but it wouldn't exist if it weren't for the history that created it. May your next model be your best work! 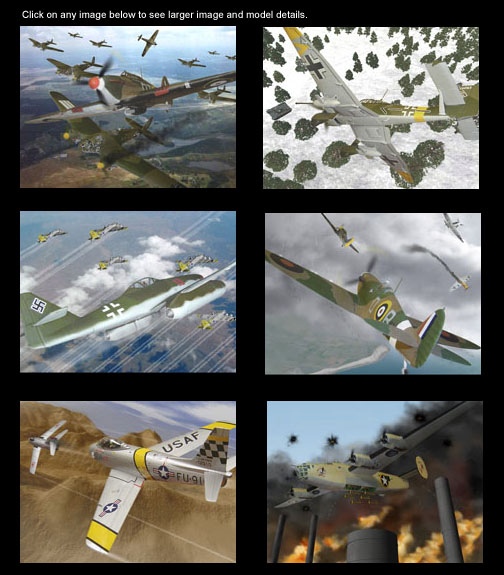 For more scale models and digital dioramas, see Aces in 1:48 Scale and Famous Bombers in 1:72 Scale