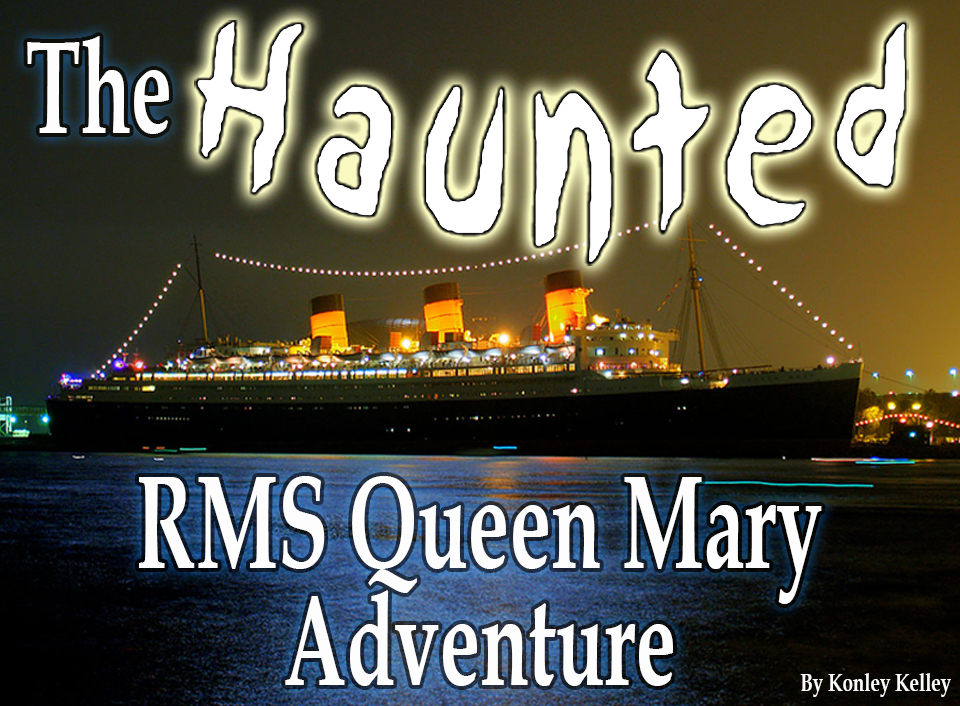 The world famous HMS Queen Mary is permanently docked in Long Beach, California. She is now a floating hotel and tourist attraction.

My first visit to the Queen Mary was December, 1989. I worked for Chiat/Day/Mojo an ad agency in Venice, CA. The agency reserved the aerodome next to the Queen Mary that housed Howard Hughes' famous seaplane, the Spruce Goose, for our agency Christmas Party.

The party was fun but I especially enjoyed my late night walk on the decks of the Queen Mary. At night she is beautifully lit from bow to stern. It was a chilly night and the lights created a foggy glow in the evening mist. The decks were mostly deserted so it seemed like I had the ship to myself. It was an exhilarating experience.

Five years later, I visited the Queen Mary with my fiancee, Whitney. This time it was a sunny Saturday afternoon. The Spruce Goose was gone. She was sent to a museum in Oregon. Next to the ship was a crane where people could bungie jump. The ship and grounds were very crowded. It was like being at an amusement park.

I was excited about really touring the ship and taking in all the museum exhibits. We signed up for a guided tour. On our tour, I asked questions about ghost-sightings and paranormal activity. Our guide politely entertained some of these questions but mainly stuck to her script, focusing on the history and artifacts aboard the ship. 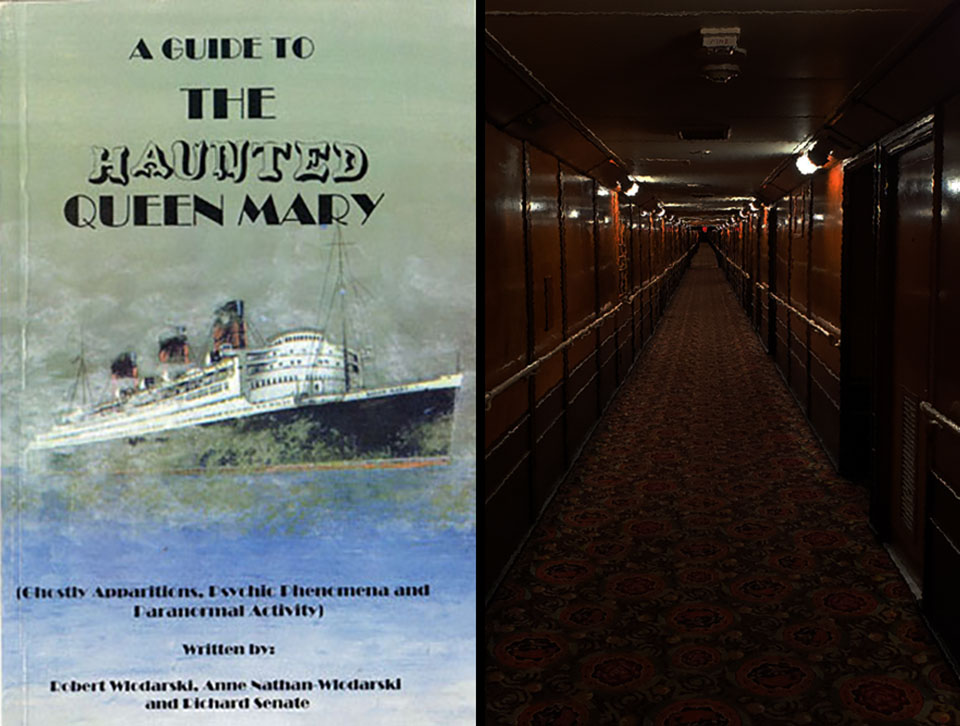 When visiting the famous indoor pool my wife sensed something strange. It is no coincidence the pool is considered a paranormal hot-spot on the ship. Some have claimed they've seen the ghost of a little girl. Her laughter or the laughter of bathers from many years ago is sometimes heard. Others have seen tiny wet footprints on the tile around the pool although it has been empty for decades.

Whitney was spooked and a little excited about what she was feeling. This really sparked our curiousity about the paranormal history of the ship.

When the tour ended and the group dispersed, the guide pulled us aside. She told us a little girl who was the daughter of a nursery worker vanished on one of the transatlantic voyages back in the 1930's. The guide led us back into the ship and gave us directions to the 3rd class nursery another paranormal hot spot on the ship. It was here Whitney sensed a very strong presence of something supernatural. We were by ourselves looking at the nursery door but had a strong feeling we were not alone.

That evening we had dinner on the Queen Mary. A very elegant-looking older couple sitting nearby struck up a conversation with us. They introduced themselves as the "Barrymores." From what they told us, the two were passengers on the Queen Mary when she was making crossings of the Atlantic many years ago. They delighted in telling us about what it was like to be aboard her back then.

Today when you walk the decks of the Queen Mary, there are large B&W pictures of the ship in her prime. Many include pictures of celebrities and politicians who famously traveled aboard. I can swear we saw a picture of the Barrymores looking much like they did at dinner with us. Of course, this would have been impossible unless...boo!

In 1995, we returned to the Queen Mary for a Halloween Party. Our best friends, Rudy and Lisa, joined us along with some other couples. We reserved a block of rooms in the hotel portion of the ship. When she sailed these rooms were the first class cabins.

I dressed up as "The Fly" from the classic horror movie. Whitney was the "Cat in the Hat" with a fly swatter to keep me in line. 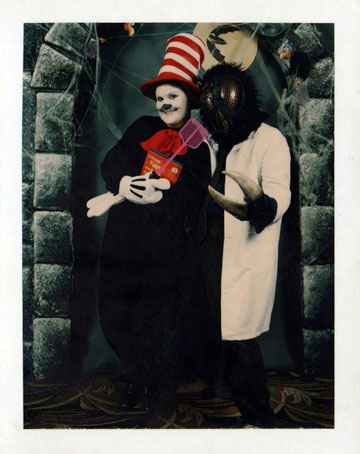 The Queen Mary's engine room was turned into a crazy fright maze. The activities aboard included a "ghost tour" so we quickly signed up. We loved the ghost tour. It took us to spots where many of the paranormal sightings on the ship have occured and we heard stories about passengers who may have never "disembarked" the ship. The tour was fun because they planned gags to scare us, like a cloud of dry ice at the indoor pool and a ghostly engineer pounding a wrench in the bowels of the ship.

Although we had a great time neither of us felt that strange but exciting way we did when "ghost-hunting" on that sunny Saturday afternoon back then.

Later that October night when our friends were back in their cabins, Whitney and I took a romantic walk on deck. There is a stage aft of the ship. The Cat in the Hat sang to The Fly with a backdrop of glowing lights in Long Beach harbor and a beautiful starry sky.

I found a scale model kit of the Queen Mary and built her with a little Cat in the Hat "hat" and The Fly aboard. The model is a reminder of that memorable night and this majestic ship of yesteryear. 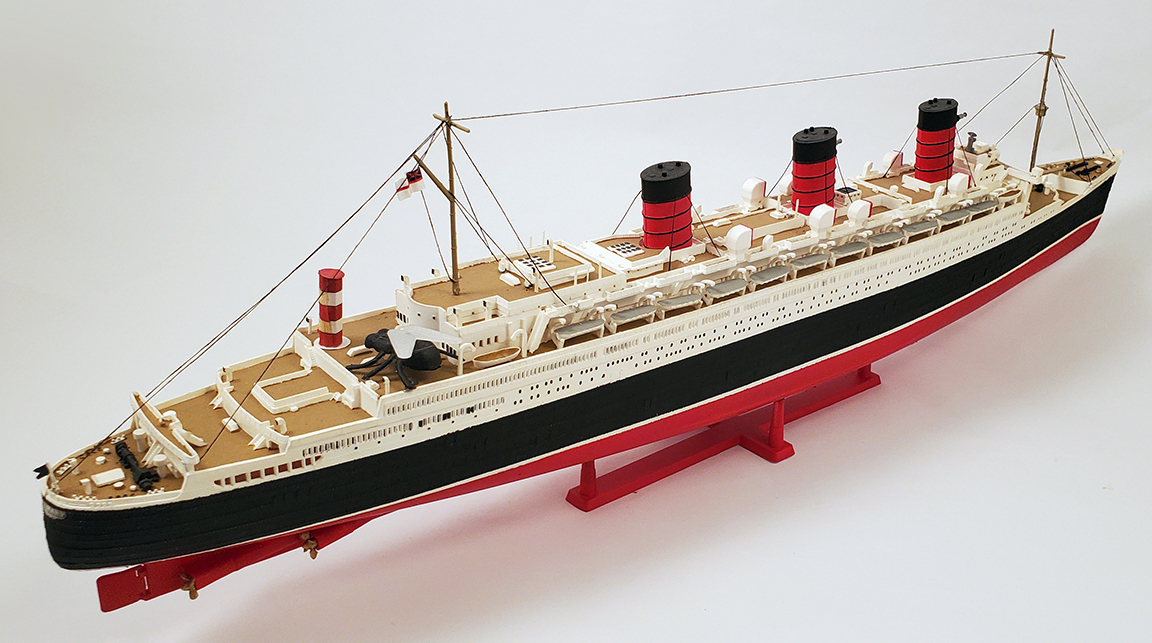 The Queen Mary is a beautiful ship. Maybe she is haunted. I wouldn't be surprised. A spirit may be drawn to a place they once experienced great joy or adventure when alive. For that, the Queen Mary is defnitely the ticket.