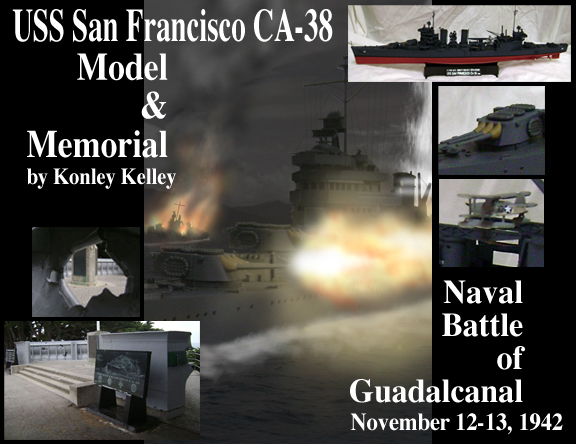 "Like a barroom brawl after the lights had been shot out." This was a description of the Naval Battle of Guadalcanal given by an officer serving on the destroyer USS Monssen. During the battle, US naval forces and naval forces from the Empire of Japan engaged in fierce close range combat off the shores of Guadalcanal the night of November 12-13, 1942. Losses were heavy on both sides. Although US losses were numerically greater, they succeeded in turning back the Japanese and protecting US forces holding strategic positions on the island. 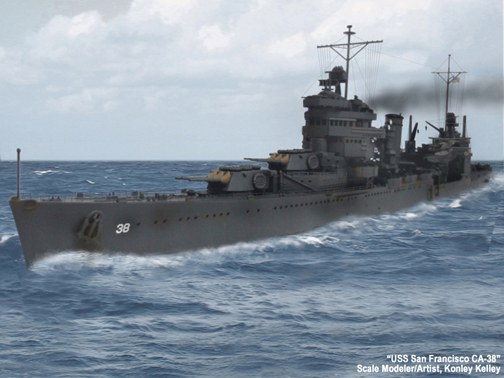 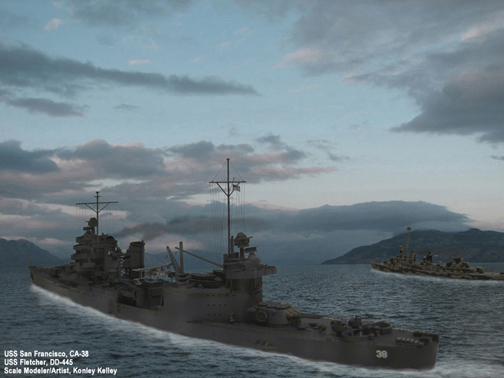 In pitch darkness, the two opposing forces steamed right into each other. Admiral Callaghan discovered he had Japanese warships on both sides of his column of ships. As searchlights found their targets and star shells lit up the night, Admiral Callaghan ordered, "Odd ships fire to starboard, even ships to port." 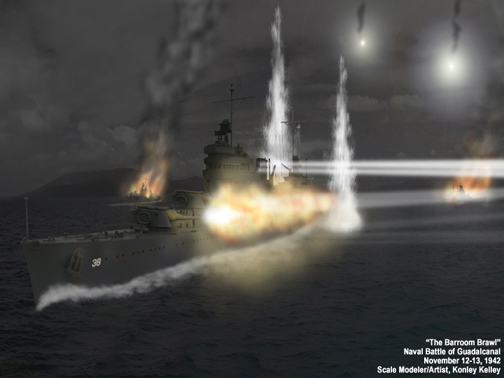 The Frisco found herself trading salvoes at 2,500 yards with Admiral Abe's flagship, the battleship Hiei. The Hiei's 14" guns found the Frisco's bridge killing Admiral Callaghan, Captain Young and many others. The Frisco received 45 enemy hits. 83 crewman were killed and 104 wounded. The Frisco also damaged the Hiei. A shell penetrated Hiei's steering gear room causing irrepairable damage. She later was found and sunk by US aircraft.

The badly wounded Frisco made it safely back to port for repairs. She went on to serve in numerous campaigns and survived the war.

I picked up Trumpeter's 1:350 USS San Francisco at the 2008 Squadron Open House. I knew the Frisco was the second most decorated ship in WW2 (17 Battle Stars and a Presidential Unit Citation). Plus, my Dad was born and raised in San Francisco. I spent a lot of time visiting my grandparents when I was a kid - I love the City by the Bay. So...I had to have the ship named after this great city and Trumpeter created an excellent, quality model kit for me to build.

The painting and construction went very smoothly. I saw an earlier model of the USS San Francisco on www.modelwarships.com and adopted some of the paint choices. For the most part, the ship was dark blue (Measure 21) - a Navy Blue hull and superstructure. I painted the deck planking Weathered Deck Blue. I haven't added any stretched sprue rigging or photo etch yet. Rigging I can do. I have tried photo etch and often goober it up. I also do not have photo etch for this model kit.

But, as you can see in the "action" pics, I do have Photoshop photo etch and rigging resources :) 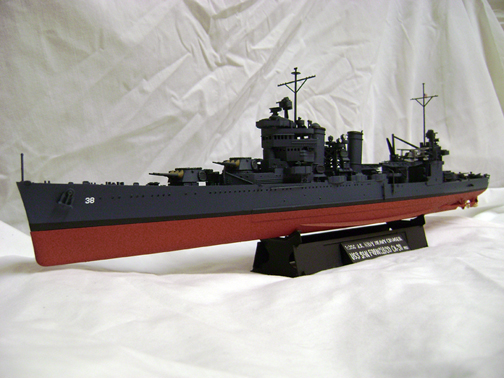 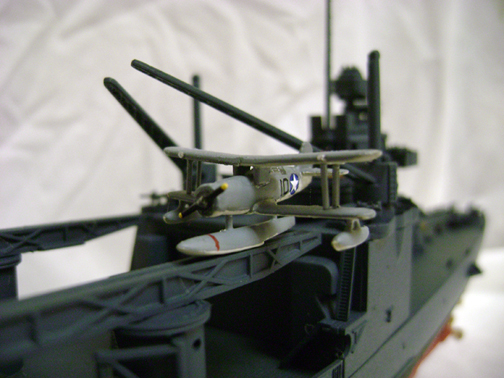 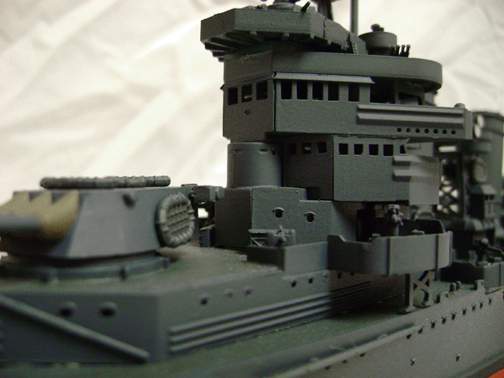 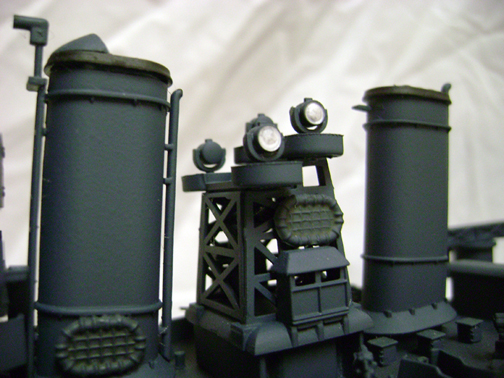 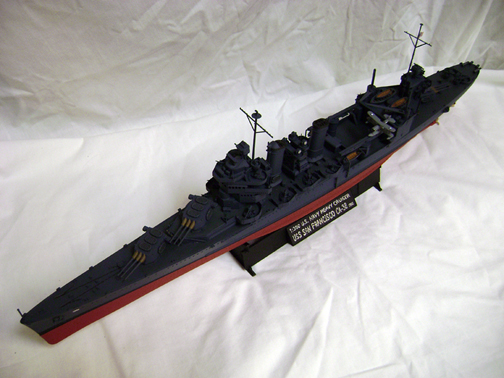 Below are pictures from a Summer 2009 family vacation to San Francisco. We stopped at the USS San Francisco Memorial at "Land's End" on the coastline just to the west of the Golden Gate Bridge. The memorial is comprised of a damaged section of the flag bridge from the Frisco following the Naval Battle of Guadalcanal. Prior to repairs after the battle, the damaged flag bridge wings were removed and later installed as part of the memorial in 1950. The Frisco was decommissioned in 1947.

It is shocking to see the shrapnel damage to the bridge up close. One can't imagine the force required to puncture and peel back this metal. It is a moving reminder of the horrific battle that took place and the sacrifice of Admiral Callaghan and the Frisco's crew who valiantly fought for their country in the early stages of the Pacific War. 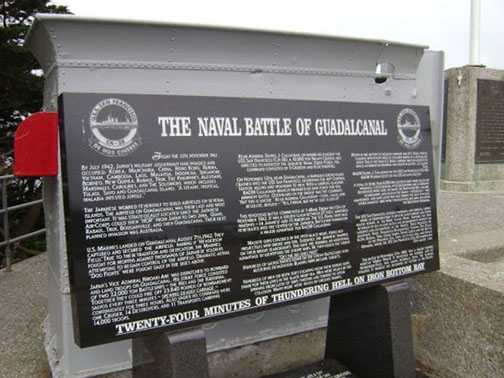 The story of the "Naval Battle of Guadalcanal." 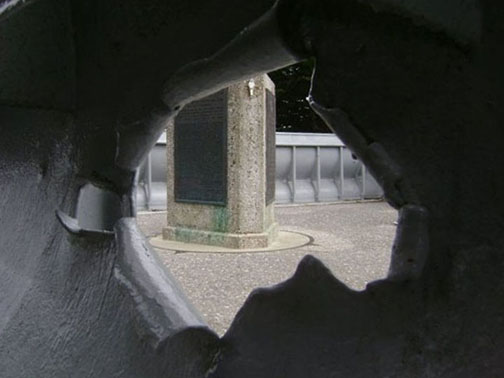 Base of the memorial flagpole seen through a battle damaged flag bridge. 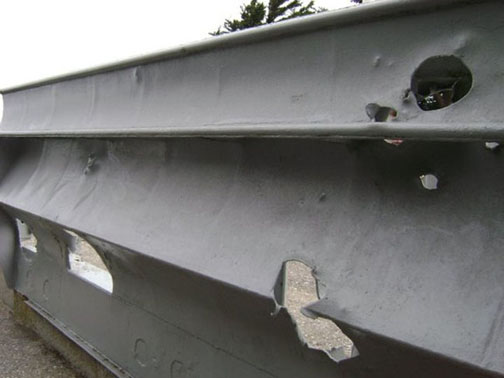 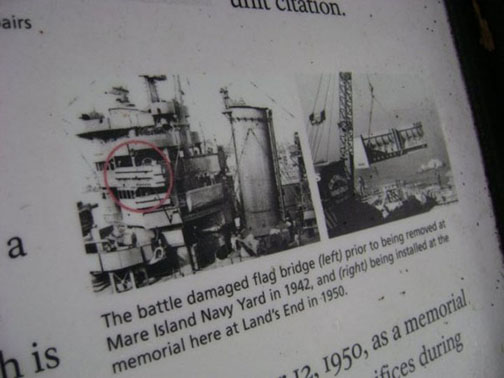 A graphic shows the battle-damaged flag bridge position on the ship. 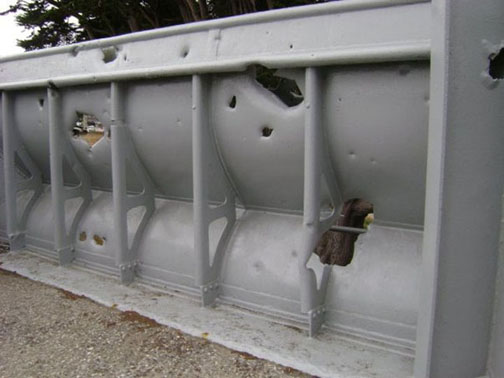 Another view of the battle-damage. 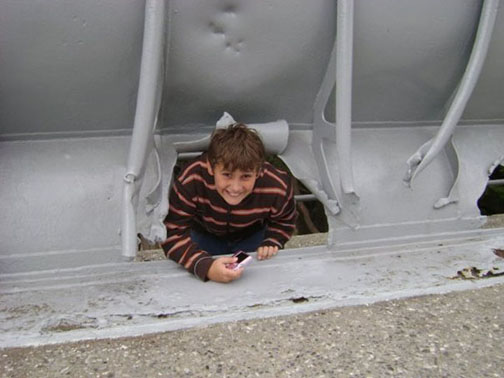 My 10-year old son, Kurt, peering through a shell hole. 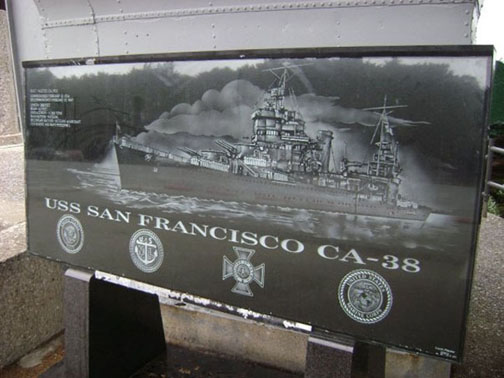 A graphic placard of the USS San Francisco CA-38. 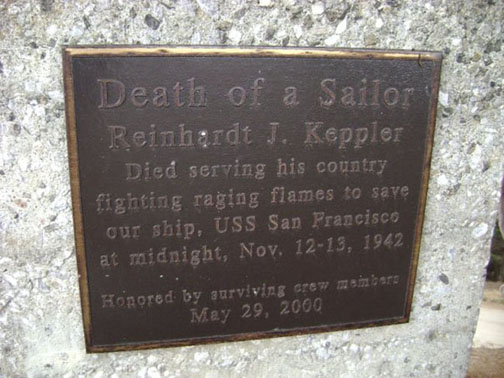 A tribute to a sailor lost in the battle. 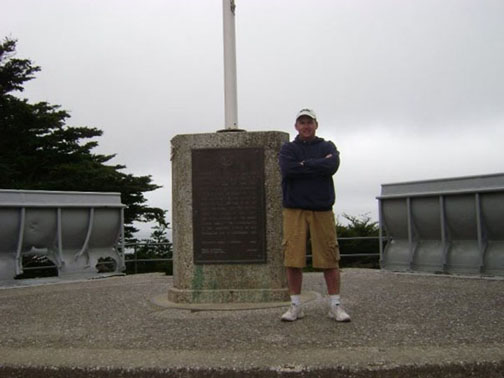 Me standing at the center of the memorial. 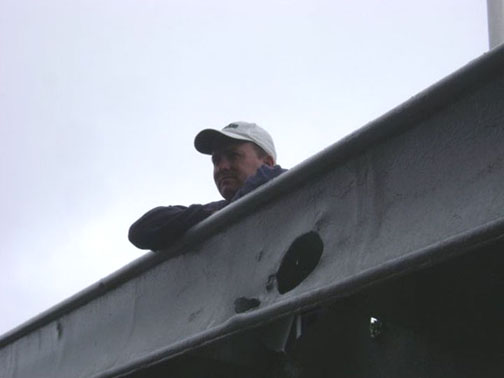 Reflecting on the battle and the men who stood on this bridge. 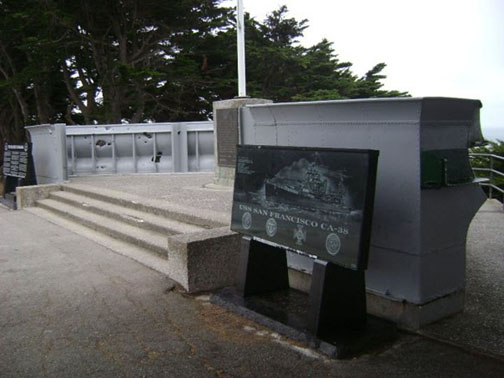 Another view of the memorial site. 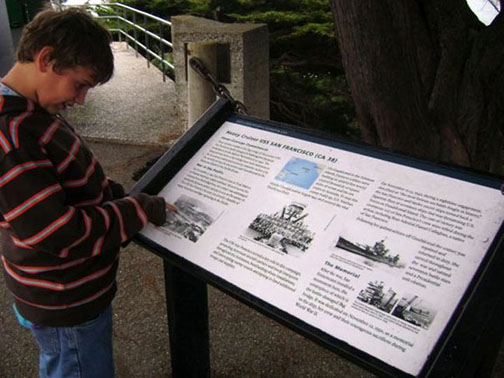 Kurt spots the Frisco in an aerial photo taken from a Japanese aircraft at Pearl Harbor on December 7, 1941.

For more information on the USS San Francisco Memorial, go to www.usssanfrancisco.org